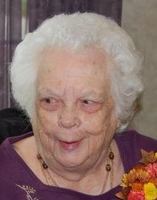 Anna Katherine Juon of Madrid, formerly of Ankeny and rural Polk City passed from this life on July 21, 2011 at the Madrid Home. A Mass of Christian Burial will be held at 10 a.m. on Monday, July 25, at St. Malachy's Catholic Church in Madrid with burial following at Lincoln Cemetery in Alleman, Iowa.

She was born October 12, 1919, to Alva LeRoy and Agnes Hazel (Sweeney) Darnall in Des Moines, Iowa. Anna attended and graduated from East High School in Des Moines where she was a member of the swim team and one of only a few women who received an athletic letter at the time. Anna worked as a comptometer operator for Flynn Dairy. During that time she met and later married Elmer Juon. They were introduced by her co-worker Ivy Helland who eventually became her sister-in-law. After marriage, Elmer and Anna farmed south of Alleman and raised three children. Anna spent many years as a member of the Y-4 Club, 4-H leader and CCD teacher at St. Mary's Catholic Church in Elkhart, and in later years was a proud Perky Penguin.

Anna loved baking, needlework, doing word searches, attending church, going for coffee or out to eat with her friends, and spending time with family, especially her long awaited great-granddaughters.

Anna is preceded in death by her parents; husband; cousin, Francis Booe, who was like a sister to her; and her son, David in 2010.

The family will receive friends from 5 to 7 p.m. with a 7 p.m. Vigil on Sunday, July 24, at Iles Funeral Homes - Sundberg-Kirkpatrick Chapel. Memorial contributions may be made to the ACTS Fund at the Madrid Home.

To send flowers or a remembrance gift to the family of Anna Juon, please visit our Tribute Store.