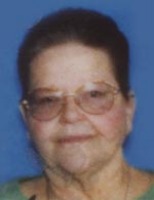 Betty Flora Nelson was born December 10, 1941 at the family home in Binger. Oklahoma. She was the daughter of Vollie and Flossie Gentry. She attended Oney public school where she graduated valedictorian of her class. She was united in marriage to Robert (Bob) Kirkhart, one son was born to this union. Bob preceded her in death.

She married David Nelson on October 15, 1985. Betty was a business lady. She worked at several different enterprises over the years. She was an exceptional cook and seamstress. Betty was a master at anything she tried.

Betty passed from this world August 15, 2012 at the age of 70 after a long battle with health problems. She was preceded in death by her parents and one nephew. She is survived by her husband, David Nelson and son, Allan Kirkhart both of the home, four sisters, Joann Thomas, Jeannie Hileman, Judy McCauley and Janette Harris all of Oklahoma.

Per Betty's wishes no services will be held.

To send flowers or a remembrance gift to the family of Betty Nelson, please visit our Tribute Store.