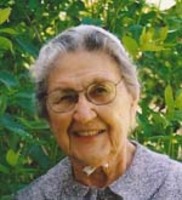 Beulah went home to heaven on June 16, 2011. She died peacefully at Spurgeon Manor at 95 years of age from congestive heart failure.

Beulah Jeanette Flora was born on August 10, 1915 north and west of Quinter in Gove County, Kansas. She was the tenth child of Josiah Benjamin Flora and Sarah Elizabeth Jamison.

Beulah married Paul Shideler Moss on November 4, 1937 in Kansas. To this union were born two sons and five daughters. They spent their entire lives in the rural Granger, Waukee, Grimes, and Dallas Center areas as tenant farmers, and became land owners in 1958. After her husband Paul died in 1967, Beulah supported her family working as a CNA at the Dallas County Hospital in Perry. She married Ray Reed on December 27, 1976. Ray passed away at their home on April 8, 2004.

Beulah moved to Spurgeon Manor on March 3, 2007 where she lived until her death.

All services will be at the Dunkard Brethren Church, 23209 Quinlan Avenue, Dallas Center. Viewing and family visitation will be held from 5-8 p.m. on Saturday, June 18. The funeral service will be held at 2 p.m. on Sunday, June 19. Burial will follow at the Brethren Cemetery.

Memorial contributions may be made to the Dunkard Brethren Church or Spurgeon Manor.

To send flowers or a remembrance gift to the family of Beulah Reed, please visit our Tribute Store.