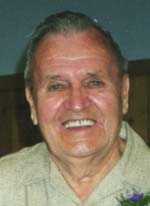 Chet and his twin Lester were born March 30, 1920 to Charles and Mabel Harvey of Fort Des Moines, where he grew up and attended Lincoln High School. He joined the Iowa National Guard and received Army training in Louisiana. He was among the first Army soldiers to be sent to Europe with the 34th Division during WWII. He stormed the beaches of Normandy and was in the Battle of Bulge. After 3 ½ years in the service he worked for Solar Aircraft as a welder. He joined the Local 45 Sheet Metal Union, where he enjoyed the work and his welding buddies. He retired from The Waldinger Corporation in 1981. Chet married Anna Myrtle Love in 1940 and raised their family of five in Des Moines. Chet was a handy man for many family members and friends. He spent time working on various projects in his shop. He enjoyed cracking walnuts, feeding birds and reading. Every Tuesday he looked forward to the live music, dancing and his friends at Prairie Meadows.

Memorial contributions may be made to Simpson United Methodist Church or to his family.

Life is not a journey to the grave with the intention of arriving safely in a pretty & well preserved body, but rather to skid in broadside, totally worn out and proclaiming, “WOW WHAT A RIDE!”

To send flowers or a remembrance gift to the family of Chester Harvey, please visit our Tribute Store.