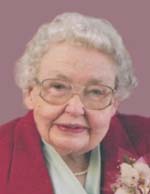 Evelyn Todd Kirkpatrick, 83, died on Wednesday, January 23, 2008, at Kavanagh House located on 56th Street in Des Moines. Funeral services will be held at Westover Baptist Church located at 63rd and Hickman Road in Des Moines, on Sunday afternoon, January 27, at 2:30 p.m. The family will welcome friends in the Fellowship Hall at the church immediately after the service.

Evelyn was born in Anderson, SC on August 2, 1924. She worked at Clemson for a year after she graduated from high school. She attended Anderson Junior College a year, earning membership in Phi Theta Kappa, Junior College Honorary Scholastic Society, and then resumed working at Clemson College. Evelyn met Herman while he was in the Army Specialized Training Program as a student at Clemson. She was in the church choir. He caught her eye. She smiled back. He first experienced her family's Southern hospitality on Christmas Day in 1943 and experienced it many times after that. They saw each other often during those months at Clemson. He was sent to Fort Jackson, near Columbia, SC, in April 1944. They continued seeing each other. He was sent to Europe as an army replacement. Hundreds of letters were exchanged. His division, the 104th, established a combat attack record that led to quick redeployment to the states after VE day for 30 days of R&R. This was to be followed by training to assault the beaches of Japan. Evelyn and her mother came by train to Iowa to meet his family. Evelyn received a diamond that summer. Many tears were shed when Herman caught the train when his R&R came to an end. Two bombs were dropped in Japan. The war was over!!! Herman was honorably discharged on January 23, 1946. Evelyn married him January 27, 1946, in her parents' home. Their parents and their younger sisters witnessed their wedding. Some of Evelyn's extended family and a few neighbors were there as well. Evelyn helped Herman reach educational goals preparing him for a career teaching physics. Evelyn worked as a secretary for the Ames Atomic Laboratory while he earned his MS degree.

Evelyn worked from 1970 to 1989 as a teacher associate at Greenwood Elementary School in Des Moines, Iowa, where she was held in high regard by professional staff, students, and parents. Evelyn and Herman are charter members of Westover Baptist Church, a church they helped to organize in 1955 on the west edge of Des Moines. She found joy in serving the Lord in church activities.

Evelyn was a gracious lady from the South always treating others with a loving heart. She always put others first, even during her last days. We will miss her greatly. Memorial gifts may be given to Westover Baptist Church, 2330 – 62nd Street; Des Moines, Iowa 50322-5002.

To send flowers or a remembrance gift to the family of Evelyn Kirkpatrick, please visit our Tribute Store.