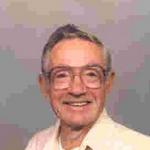 Gordon Merical, 87, a widely known resident of Adel died Saturday, January 15, 2005 at Adel Acres Care Center in Adel after complications of a stroke. Services will be held at 10 a.m. Wednesday at the First Christian Church in Adel, with burial at Oakdale Cemetery in Adel.

Gordon (Punch) Merical was born July 11, 1917 and married Florence (Marie) Sheaffer July 3, 1934. He lived most of his life in Adel. Gordon worked for Iowa Power and Light Company for 35 years, retiring in 1979. He was a member of International Brotherhood of Electrical Workers for 55 years.

He was preceded in death by his parents, Wesley and Edna Merical; brothers, Harold, Merle and Floyd; a son, Richard; and two grandsons, Philip and Rockne. He is survived by his wife, Florence (Marie) Merical; four sons, Gordon (Irene) of Adel, Jack (Glenna) of Denver, CO, Charles (Pat) of Adel and William (Dianna) of Granite, OK; three sisters, Thelma Jones of Broomfield, CO, Opal Atkins of Redfield and Ruby Leaming of Des Moines; 13 grandchildren and 19 great-grandchildren.

Visitation will be from 3 to 8 p.m. Tuesday at Brandt Funeral Home in Dallas Center, where the family will receive friends from 6 to 8 p.m. Memorial contributions may be made to the First Christian Church in Adel.

To send flowers or a remembrance gift to the family of Gordon Merical, please visit our Tribute Store.