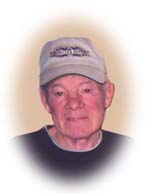 Gordon (Gordie) W. Merical died January 20, 2008 at Mercy Medical Hospital after a hard fought battle with cancer. A Celebration of Gordie's life will be held for friends and family at the First Christian Church in Adel on Wednesday, January 23, 2008. Visitation will begin at 10:00 with memorial services at 11:00, burial will follow at 2:30 in Grand River Cemetery in Grand River, IA.

Gordie was born August 10, 1936 to Gordon "Punch" and Florence Marie Sheaffer Merical in Iowa City. He was the second oldest of five children. He went to school at Adel High School. After school he joined the U.S. Marine Corps which instilled in him a lifelong passion for patriotism, and love for the American flag. Gordie was a plumber most of his life. Gordie married Irene Brown June 22, 1968, and to this union their son Wes was born.

Gordie was a avid hunter and fisherman, he loved gardening and to share his bounty with neighbors and friends. He was looking forward to the birth of his first grandchild in March.

Gordie was preceded in death by his grandparents, parents and brother, Richard Merical. Gordie is survived by his wife Irene, son Wesley his wife Laura of Boone IA, and his three brothers, Jack and his wife Glenna of Denver, CO; Charlie and his wife Pat of Adel, IA; and Willie and his wife Dianna of Granite, OK. He will be missed by his many family members and friends.

The family would like to thank First Christian Church and Adel Family Practice, with special thanks to Dr. Barger and nurse Chere Chelsvig.

In lieu flowers memorial contributions may be made to the Raccoon Valley Sportsman Club.

To send flowers or a remembrance gift to the family of Gordon Merical, please visit our Tribute Store.