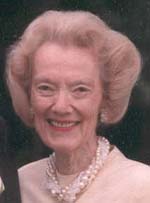 Helen Catherine Marie Anderson Cooney, 87, died Monday, January 21, 2008 at Iowa Methodist Center after a brief illness. Funeral services will be 10 a.m. Saturday, January 26 at Plymouth Congregational Church of which she was a member. Burial will be at Glendale Cemetery.

Helen was born in Chicago on January 8, 1921, the daughter of Swedish immigrants, Hugo A. and Hilda Nelson Anderson. She was educated at the Laboratory Elementary and High Schools of the University of Chicago and went on to two years of junior college. She was a model, hat designer, homemaker and community volunteer. On September 2, 1942 she married James Evans Cooney. She followed James throughout his military career and moved with him to Des Moines over 60 years ago where he became a founding member of Ahlers, Cooney Law Firm.

Helen was a member of PEO, the Junior League and the Des Moines and Wakonda Clubs. She volunteered for Hospice of Central Iowa in its early years. She enjoyed cooking, calligraphy, dogs, needle point and travel. Many people will remember Helen for the Tootsie Rolls she loved to share with everyone she met.

Friends may call after 2 p.m. Friday at Iles Funeral Homes- Dunn’s Chapel where the family will receive friends from 5 to 7 p.m. Friday. Memorial contributions are being directed to Hospice of Central Iowa or the Animal Rescue League.

To send flowers or a remembrance gift to the family of Helen Cooney, please visit our Tribute Store.