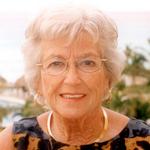 Helen was born in St. Paul, Nebraska to Ray D. and Florence Arnold. When she was a small girl the family lived briefly in Des Moines before settling in Iowa Falls, IA. She learned to hunt, fish, ride and golf as a girl and began driving when she was 14. She attended Iowa State University where she was a member of Chi Omega sorority and was crowned homecoming queen. After her sophomore year she transferred and was graduated from the University of Colorado. Her first job was as a stewardess for United Airlines, which ignited a life-long love of travel. Returning to Des Moines, she worked as a copy writer for KRNT Radio, where she met her first husband, Al Rockwell. She later worked at the P.E.O. Executive Office. A member of Chapter KT, P.E.O. was dear to Helen's heart and she was thrilled that her daughter and 3 granddaughters shared this bond with her.

Helen's passions were her family, traveling and playing tournament bridge. She was a member of the American Contract Bridge League for over 40 years and attained the highest rank of Grand Life Master. Helen, together with her husband and best friend, John, competed all over the United States, winning two national championships. They represented the United States in international tournaments three times. Helen contributed to the local bridge unit by chairing countless tournaments, but her greatest gift to the game was her willingness to play with new players and make everyone feel welcome. Her competitive but friendly spirit won her the affection of players everywhere.

Helen and John traveled to over 50 countries and visited most of the United States. She religiously sent postcards to family members from every trip and would always find the perfect souvenirs to bring back to them. Three special trips included taking her granddaughters to celebrate their tenth birthdays in Europe, Italy, and Hawaii. Maui was Helen's favorite spot on earth.

Helen didn't believe in growing old. She was proud of her Danish heritage. Her personal philosophy was if something was worth doing, it was worth doing well. She loved sunning, swimming, dancing and was active her entire life. When she was 85 and still doing aerobics, her long time instructor refused to take any further payment for classes. At 87 though experiencing health problems, she was determined to dance at her granddaughter's weddings… and she did! Her last wish was to live long enough to hold her great grandson…and she did that too!

To send flowers or a remembrance gift to the family of Helen Gustafson, please visit our Tribute Store.