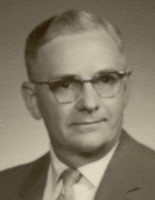 Howard Wayne Dexter, 98, formerly of West Des Moines, passed from this life on Sunday, January 6, 2008 at Bickford Cottage in Urbandale.

Funeral services will be held at 10:30 a.m. on Thursday, January 10, at New Hope United Methodist Church in Des Moines, where the family will greet friends from 9:30 a.m. until the service time on Thursday, in the Ruby Chapel. Private committal services will take place at Memorial Park Cemetery in Waterloo, Iowa.

Howard was born on March 30, 1909 in Vinton, Iowa to John Albert and Minnie Alice Standard Dexter. He was a graduate of both Lincoln High School in Vinton and Gates Business College in Waterloo. Howard married Olive Gail Smith on November 15, 1931 in Osage, Iowa and to this union, three children were born, Gerry, Mary Ann and Peg. Howard was employed with Rath Packing Co. as a Controller and Treasurer, until he retired on May 1, 1973. Howard had previously lived in Houston, TX, Dallas, TX, Waterloo, IA and Eden Isle, AK, before moving to West Des Moines.

In lieu of flowers, the family has respectfully requested that any memorial gifts be made to the First United Methodist Church in Waterloo.

To send flowers or a remembrance gift to the family of Howard Dexter, please visit our Tribute Store.