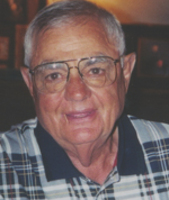 Jack, as he was known, passed away at home on July 13, 2012. Jack was born on August 11th, 1924 in Little Rock, AR to Ray B. Dunley and Marjorie Egbert Dunley. He was raised in Des Moines, attended St. John's Catholic Grade School and graduated in the class of 1942 from Dowling High School. Jack served 3 years with the Merchant Marines, having the advantage of seeing many countries, while serving his country.

Jack was the "smiling face" behind the bar at Dunley's Lounge for 35 years. He spent 10 years as a Sanitarian with the Polk County Health Department and for 9 seasons, he was a starter/ranger at Waveland Golf Course. Jack loved being involved with the Waveland Men's League. For 30 summers, he had a Maid Rite stand at The Iowa State Fair. He was known on the grounds then as "French Fry Jack".

Jack loved all sports. As a child, he was the Marble Champ and as an adult he was the Cribbage Champ. He played and coached football and basketball. Golf was his passion over the years, spending countless hours on the fairways, greens, and clubhouse at Grandview with his friends and family. Jack was also a "FAN" of all sports, always "loyal" to the Drake Bulldogs, the Iowa Hawkeyes, Iowa State Cyclones and the Fighting Irish.

Jack married Mary Jean Dunphy in December 1962. They would have celebrated their 50th wedding anniversary in December.

Jack was so proud of his three daughters and grandchildren, Casey Dunley of West Des Moines, and her children Connor and Catherine Freeman, Carey Carlson (Curt) of Johnston and her daughter Lily Dunley-Williamson and their daughter Caleigh and his daughter Taylor, and Candace Martin (Ryan) of Birmingham, MI and their children Ava and Cam. He is also survived by a brother, Robert P. Dunley of Concord, CA, half sister Judy Haubrich (Jerry) of Kiowa, TX, brothers in law Lawrence Dunphy of Perry, IA, Dennis Dunphy of Las Vegas, NV and a sister in law, Ann Lundy of Las Vegas, NV.
Also left to grieve his passing are many nieces and nephews. Laura Leonard, who held the family together, Sam Reese, a dear friend who was "there" and many neighbors and friends who helped Jack through his troubled months. Jack was preceded in death by his parents and his brother James P. Dunley of Concord, CA, and brother in law George J. Dunphy.

According to his wishes, Jack was cremated. His family will greet friends at Iles Funeral Homes-Westover Chapel on Monday July 16th from 5 - 7 p.m., where a Wake Service will be held at 7pm. A Mass to celebrate his life will be said at St Ambrose Cathedral Tuesday the 17th of July at 10 a.m. Inurnment will follow the Mass at Glendale Cemetery.

To send flowers or a remembrance gift to the family of John Dunley, please visit our Tribute Store.