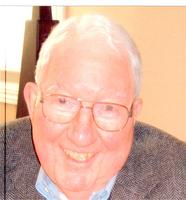 John V. Synhorst, age 88, died peacefully at Wesley Acres on Friday, July 27, 2012 after a long and full life. He was born in Rochester, Minnesota on August 1, 1923 where his father Dr. John B. Synhorst was on staff at the Mayo Clinic. Memorial services will be held 10:30 a.m. Thursday, August, 2, 2012 at Central Presbyterian Church on Grand Avenue in Des Moines. The burial will be private at Resthaven Cemetery in West Des Moines.

Jack was a graduate of the University of Iowa, both Undergraduate and Law School. He served in the Army Air Corps as a 2nd Lieutenant during WW II and flew numerous missions in a C47 cargo plane carrying fuel to Gen.George Patton during his march to Berlin. Jack was a senior partner in the Bradshaw Law Firm where he worked for fifty years. He was an avid Iowa football fan, loved duck hunting and training Labrador retrievers. Jack and his late wife, Ann, enjoyed spending time at Lake Okoboji with family and friends. Jack and Ann were members of the Central Presbyterian Church, Wakonda Club and The Des Moines Club.

Jack is survived by his son Dr. John B. Synhorst II and his wife Dr. Suzanne; his daughter Julie Linn and her husband Bruz; and his daughter Susan Textor and her husband Jack. "Jason" as he was affectionately called by his seven grandchildren and five great-grandchildren enjoyed the love they brought to our lives. The family would like to give special thanks to Cliff and Babs Marten for the caring friendship they shared with Jack.Everyone is very appreciative of the wonderful care provided by the staff at Wesley Acres.The family will greet friends from 4-6 p.m Wednesday, August 1, 2012 at Dunn's Funeral Home 2121 Grand Avenue.

To send flowers or a remembrance gift to the family of John Synhorst, please visit our Tribute Store.