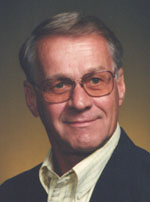 A Mass of Christian Burial will be held at 1 p.m. on Saturday, February 9, 2008, at Holy Trinity Catholic Church. A graveside service will follow at 4 p.m. at Humeston Cemetery, in Humeston, IA.

Joe was born on October 2, 1944, to Wilbert F. and G. Arloene (Henderson) Muhlenbruck in Hampton, IA. He was a graduate of CAL Community High School in Latimer, IA and attended Ellsworth Community College, in Iowa Falls, IA. He had been the owner of several service stations, among other jobs, in Des Moines, before retiring to Bella Vista, AR, in 2007. He was an avid racing fan, both watching and attending.

He was preceded in death by his parents, grandparents and several aunts and uncles.

To send flowers or a remembrance gift to the family of Joseph Muhlenbruck, please visit our Tribute Store.