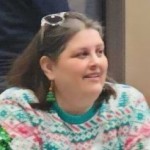 Lisa Milne, 45, passed away suddenly and unexpectedly on Monday, December 20, 2021. She was born January 12, 1976, in Carroll, Iowa, to Gerald and Kathyrn (Riedell) Van Erdewyk and grew up in Breda, Iowa as the baby of a family of eight children. She was a 1994 graduate of Kuemper Catholic High School, a 1998 graduate of Iowa State University, and earned her Masters of Library Science at the University of Maryland in 2001. She worked as a children's librarian for the Loudoun County Public Library for several years, primarily at the Lovettsville, Virginia, location.

Lisa met James Milne at Iowa State where they worked together at Parks Library. James would say that they had a few dates together in their last year at Iowa State, but Lisa always insisted those weren't really dates and would claim that they never officially dated until 1999 when they were both then located in Northern Virginia. They were married on June 9, 2001, in Herndon, Virginia. In 2002, they moved to Charles Town, West Virginia, as their Reston, Virginia, the townhome was in Lisa's opinion, a "baby deathtrap" and not suitable to start a family in. They welcomed their first son, Andrew, in 2003.

Long trips back to see families convinced Lisa and James to move back to Iowa in 2005. Lisa decided to spend a few years focused on the family. A second son, Henry, joined them in 2007. As the boys got older, she started working part-time at Barnes & Noble. She eventually stepped away and spent her last years chauffeuring her sons to all of their activities and keeping the family running.

Lisa loved theme meals. She would make sure to have a meal for the opening ceremony of the Olympics based on the host country. For Robbie Burns night, she'd have a faux-haggis with neeps and tatties. When the family drove to Missouri to witness the solar eclipse in 2017, she packed along with Sun Chips, Eclipse gum, Capri Sun, Star Bursts, and several other food items that had solar-sounding names. She loved "The Great British Baking Show" and would often try to make a dish that matched that week's theme to eat while watching the episode.

Lisa loved to read. One of her favorite series was the Little House books by Laura Ingalls Wilder. Each summer, when it was hot and muggy, she would reread "The Long Winter" to help cool off, and each winter, she loved to read "Farmer Boy" because of all of the descriptions of the meals. During college, she worked a summer at Living History Farms. She learned how to churn butter and make brooms and cook over a fire. She planned out several road trips for her family that just happened to drive past the Ingalls family homestead in De Smet, South Dakota. Or the home where the Wilders stayed in Spring Valley, Minnesota. Or the Laura Ingalls Wilder home in Mansfield, Missouri, where the books were written.

In lieu of flowers, memorials may be made to the Animal Rescue League of Iowa. Lisa was a blood donor at Life Serve and upon her death continued giving of herself through the Iowa Donor Network. Please consider signing up to be a blood or organ donor.

Online condolences are welcome at www.ilescares.com

To send flowers or a remembrance gift to the family of Lisa Milne, please visit our Tribute Store.