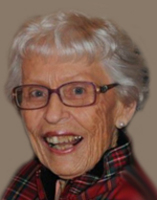 Maisie Russell, 91, died peacefully in her sleep March 6, 2013, in the loving care of her family and Wesley Life Hospice. Funeral services will be held 11 a.m. Monday, March 11, 2013, at Iles Funeral Homes-Westover Chapel. Cremation will follow services and a private committal service will be held at a later date at Masonic Cemetery in Des Moines.

Maisie was born August 25, 1921, in Des Moines at Congregational Hospital to David and Eliza Sanderson who immigrated to this country from Scotland. She attended Roosevelt High School and Coe College and raised her family on a farm west of Des Moines. For over 50 years Maisie was an active member of Maple Grove United Methodist Church in Waukee. Her church and her family were the great passions of her life. Her warmth and grace endeared her to everyone she met.

Maisie was a member of The North American Lilly Society, Scottish Heritage Society of Iowa and past president of the Greater Des Moines Garden Club.

The family will receive friends from 3 - 5 p.m. Sunday at Westover Chapel. Memorials may be made to Maple Grove United Methodist Church Hope Fund. Online condolences will be welcomed at IlesCares.com.

To send flowers or a remembrance gift to the family of Maisie Russell, please visit our Tribute Store.