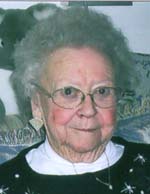 Margaret E. Freed, 90, passed away suddenly, January 21, 2008, and has gone to be with the Lord. Funeral services will held at 10:30 am, Friday, January 25th at Grace Lutheran Church with burial to follow at Highland Memory Gardens Cemetery.

Margaret was born April 25, 1917, in Ottumwa, Iowa to Richard F. and Doris Young Canfield. Her mother passed away when she was a girl, so she was raised by her maternal grandparents. She attended Augustana College, as did her high school sweetheart, Walter 0. Freed. They married on June 7, 1937, and moved to Des Moines soon after. She worked for her father at Red's Bar-Be-Que, which was under the (now) Des Moines Playhouse during WWII. Later they were partners with her parents in Dick Canfield's Drive-in, at Merle Hay and Douglas, from 1947 to 1967. Mr. Freed passed away April 26, 1979, following a car accident. Margaret was a 67 year member of Grace Lutheran Church., where she was past president of Grace Lutheran Church Women and past directress of the Altar Guild. Past president, secretary and treasurer of the Lutheran Hospital Auxiliary and an active volunteer since 1962. Before that she served over 2500 hours as a volunteer at Veterans Hospital. She served on the Iowa Lutheran Hospital Board of directors. She was also Past Worthy Matron of Waveland Park, O.E.S., now Acanthus-Waveland O.E.S. and a member of Daughters of the Nile, Netaker Temple #11. Shrine ladies auxiliary hospital unit. Past president of Gamma Nu chapter of the Women's Life Insurance Society. Besides being an avid volunteer, she enjoyed writing poetry, reading, and traveling all over the world.

Left to mourn her passing are her children and their spouses Richard and Barbara Freed, The Villages, FL, and Senna (nee Ann) and Ira Cunningham, Aledo, IL. She will also be missed by seven grandchildren; Christine, Terry, Tiffany, Chase, Tjader, Tjett, Joshua, and three great-grandchildren; Brandon, Tarquin and Jadzia. She was preceded in death by her husband, and a brother, Robert P. Kress, Sr.

A visitation will be held from 4 to 6 pm, Thursday at Westover Funeral Home. Memorial contributions may be made to the Animal Rescue League of Iowa or the Mayo Clinic’s Fund for Alzheimer’s Disease Research.

To send flowers or a remembrance gift to the family of Margaret Freed, please visit our Tribute Store.