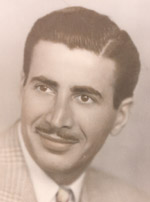 Ned Nahas, beloved father, grandfather, brother, uncle, cousin and friend passed away on January 24, 2008 at the age of 88. A Mass of Christian Burial will be held at 10:00 am, Tuesday, January 29, 2008 at St. Augustin Catholic Church with burial to follow at Glendale Cemetery.

Ned was born November 14, 1919 the son of Nabhan and Rose Nahas in Des Moines, where he lived until he was 14. He struck out on his own and headed West during the Great Depression until he settled in California and later moved to Las Vegas, Nevada. Ned was a professional card player for more than 20 years until he returned home to Des Moines to be near family. For the remainder of his life his greatest joy came from his family, his Catholic faith and his Lebanese heritage.

Ned was preceded in death by his parents; sisters, Rita, Freda, Helen and Mary and a brother, Fred. He is survived by his son, Steve (Elizabeth) Nahas; grandchildren, Kelly, Natasha and Scarlett Nahas and brothers, George and Ed Nahas.

The family will greet friends from 5 to 7 pm with a Vigil Service at 7 pm, Monday, January 28th at Iles Funeral Homes – Westover Chapel. Memorial contributions may be made to St. Jude Children’s Research Hospital, 501 St. Jude Place in Memphis, Tennessee 38105.

To send flowers or a remembrance gift to the family of Ned Nahas, please visit our Tribute Store.