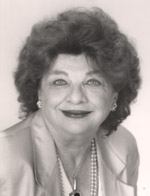 Mrs. Dinnen was born Oct. 24, 1923 in Greenville, Ohio. One of two children of J. Bernard Maher and Ruth (Neiderkorn) Maher, she grew up in Greenville and in Defiance, Ohio.

She attended St. Mary's College, in South Bend, Ind., and later graduated from Drake University. She was an avid student of the arts and excelled in oil painting.
She moved to Des Moines following World War II and her marriage to James M. Dinnen. Early on she worked in various capacities at Mid-Continent Bottlers, but eventually devoted all of her energies to the arts.
Mrs. Dinnen was a member of a number of fine arts groups, including Talent, Limited and the Des Moines Area Writers Network. She performed in numerous plays that were staged in the city and at the Ingersoll Dinner Theatre.

Her paintings were shown at churches and at St. Mary's College. She devoted much time to poetry, and her prose efforts were rewarded by a citation from the Bulwer-Lytton Fiction Contest.

Survivors include her sons, James M. "Mike" and Stephen P. Dinnen, both of Des Moines, eight grandchildren, and three great-grandchildren. She was preceded in death by her parents, her brother, John B. "Jack" Maher, and son Christopher. James M. Dinnen, from whom she was divorced, also previously died.

Visitation will be from 4 p.m. until 6 p.m. with a vigil service beginning at 6 p.m. on Wednesday, at Dunn's Funeral Home, on Grand Avenue. A funeral mass will be celebrated at 11 a.m. on Thursday at St. Augustin Catholic Church, 42nd Street and Grand.

To send flowers or a remembrance gift to the family of Patricia Dinnen, please visit our Tribute Store.