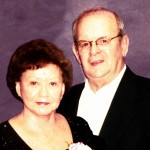 Peggy graduated from Drake University and had a long teaching career in the Des Moines schools. Peggy was married to Robert Zook and they made their home in Des Moines where they raised their son, Michael.

Peggy was family oriented and was a wonderful aunt to her nieces and nephews, Matthew Foster, Beth (Foster) Brooks, Vicki Jo (Waggoner) Myers, Heidi (Waggoner) Metcalf, Linda Waggoner-Fountain, and Rob, Mark, David, Elizabeth Waggoner and Sara (Waggoner) Patillo. They especially enjoyed trips to Peg & Bob's lovely swimming pool, playing with her (many) Maltese dogs and having the opportunity to do special art projects together.

Peggy was preceded in death by her son, Michael in January 2009; husband, Bob in 2012; her parents; her sister, Mary and her brothers, Bill and Robert. She is survived by her grandson, William Zook and daughter-in-law, Melisande Zook both of Houston, TX; her brothers, Roger Waggoner, of Davenport, IA and Joe Waggoner, of Gatlinburg, TN; and sisters-in-law, Shirley Waggoner of Altamonte Springs, FL, Joan Waggoner of Davenport, IA and Cathy Waggoner, Gatlinburg, TN.

Robert “Bob” Zook was born in March 1928 and died April 2012. He was preceded in death by his parents, Charles “Chuck” and Neva Zook.

Bob served in the Army during the Korean War and was awarded a Purple Heart. He graduated from Simpson College and had an extensive career with John Deere Company. After retirement, Bob and Peg moved to Winter Haven FL, where they enjoyed many years of spending time with friends, playing golf and sunshine.

A graveside service for Robert and Peggy Zook will be held at Masonic Cemetery at 1:00 p.m., Thursday, August 1, 2019. Online condolences are welcome at www.IlesCares.com.

To send flowers or a remembrance gift to the family of Peggy And Robert Zook, please visit our Tribute Store.