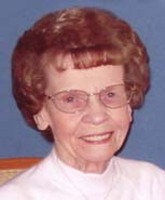 Phyllis M. Norton, 82, passed away January 12, 2008 at Taylor House Hospice after a courageous battle with lung cancer. Generous in death as well as life, she chose to donate her body to the University of Iowa for medical research. At her request no funeral is planned.

Phyllis was born in Des Moines on November 27, 1925 to Rose and John Hoffman. In addition to being a homemaker, Phyllis did bookkeeping for a small business and worked at Northwestern Bell until her retirement. She was an active volunteer, giving her time to Qwest Pioneer Retirees service projects such as Talking Books Repair and to the Heart of Iowa Ostomy Support Group as treasurer. She enjoyed spending time with family and friends, as well as, baking and sewing.

In lieu of flowers, memorial contributions may be made to the Taylor House Hospice, Qwest Pioneer Talking Book Repair or Heart of Iowa Ostomy Support Group.

To send flowers or a remembrance gift to the family of Phyllis Norton, please visit our Tribute Store.