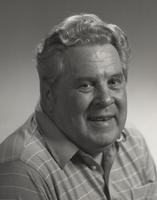 Robert Charles Renes, 85, passed away Friday, May 17, 2013 at Unity Point Lutheran Hospital. Visitation will be 6-8pm, Wednesday, May 22, 2013 at Iles Funeral Homes – Grandview Park Chapel. Funeral services will be held at 11:00 a.m., Thursday, May 23 at the funeral home. Burial with military honors will be at Laurel Hill Cemetery.

Bob was born November 24, 1927, the son of John and Edith Renes in Des Moines, where he lived all of his life. Bob served in the US Army during the Korean Conflict and worked as a supervisor for Meredith Publishing Company for 44 years, retiring in 1987. Bob owned Renes Greenhouse on the East Side for many years and during retirement worked with his son, Chuck at the greenhouse in Johnston. Bob enjoyed planting and gardening and working with his Hostas. He enjoyed the Chicago Cubs.

Memorial contributions may be directed to the Alzheimer's Association Greater Iowa Chapter.

To send flowers or a remembrance gift to the family of Robert Renes, please visit our Tribute Store.