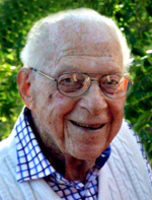 Sydney was born July 7, 1916 in Waterloo, IA to Bertha and Jacob Tabach. He was the third of their four children which included Pauline (Bob) Vidis (deceased), Rose (Joe) Epstein (deceased), and Julius Tabach. Syd graduated from Waterloo West High School and University of Illinois, where he earned a degree in civil engineering. He attributed this achievement to the encouragement and support of his oldest sister, Pauline and her husband, Bob.

Syd had lived in Des Moines since 1952 and was co-owner of Arnolds and Stearns women's apparel stores with his brothers-in-law. A passionate tennis player in his younger years, he later devoted himself to golf. He played golf three days a week and loved to brag that he could shoot his age, including this past year. On Friday afternoons, he was usually found discussing world issues over lunch with his ROMEO group which he enjoyed organizing.

Funeral services will be 9 a.m. Sunday, December 16 at Temple B'Nai Jeshurun in Des Moines. Burial will be at Jewish Glendale Cemetery followed by a luncheon at the Temple.

To send flowers or a remembrance gift to the family of Sydney Tabach, please visit our Tribute Store.