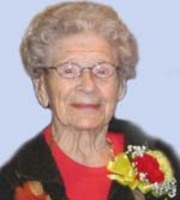 Except for a few years prior to her marriage in 1935, Thelma was a lifelong Iowan. She was born on a farm near Anita, grew up in Cedar Falls and taught in various towns in Iowa. Prior to her marriage she worked for several years for the YWCA in Janesville, Wisconsin. After their marriage, George and Thelma moved to Odebolt. Thelma moved to Des Moines following George's death in 2004 and has made many friends in her three plus years at Wesley Acres.

Thelma was a graduate of Drake University and active in many clubs, including P.E.O, D.A.R and Questers. She was the first woman elected to the Odebolt School Board and served two terms in the 50's during a time of consolidation and building. Her hobbies included gardening and flower arranging. Thelma and George loved to travel and in the 70's through the mid 90's visited many interesting places, including China, Japan, India, Egypt, Australia and New Zealand, England, Portugal.

Thelma enjoyed her birthday celebration at Wesley Acres in November, receiving and visiting with many friends and family. She was mentally alert and active all her life, and participated in many of the activities available to her at Wesley. She never met anyone without offering a smile. She was gracious, interested, caring and kind to all alike. She leaves a legacy of a life well lived and a death with dignity. She will be greatly missed. Funeral services will be held in the Odebolt Methodist Church, Odebolt, Iowa, 11:00 a.m., Saturday, February 23. Memorials suggested to the Odebolt Methodist Church or the Odebolt Public Schools.

To send flowers or a remembrance gift to the family of Thelma Dresselhuis, please visit our Tribute Store.