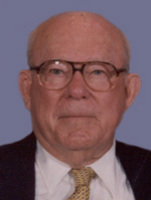 Wayne A. Wilson, 92, passed away at home on January 5, 2008. Funeral services will be held at 5:00 p.m., Friday, January 11, 2008 at Miller United Methodist Church. Private burial will be held at Laurel Hill Cemetery on Saturday.

Wayne was born in Des Moines, Iowa, on September 14, 1915. He graduated from East High School in 1933 and later studied engineering at Iowa State University and New York University. Wayne, a World War II veteran, served in the Army Air Corps. He married his wife, Mary Joy, on December 24, 1936 and together they had two daughters. For 30 years, Wayne served as a fireman and as Superintendent of Maintenance for the Des Moines Fire Department. After retiring in 1970, Wayne sold fire trucks and equipment for American La France and Welch, which he continued throughout 2006. Wayne was an active member of Miller United Methodist Church, serving on a host of groups, boards and councils. He was a proud member of the Pioneer Club and Baldwin-Patterson American Legion Post. A lifelong learner, he loved to read, but also enjoyed fishing, watching baseball, and tinkering with about any kind of gadget. Above all, Wayne loved spending time with his family.

To send flowers or a remembrance gift to the family of Wayne Wilson, please visit our Tribute Store.