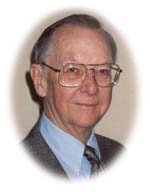 Wilson was born in Colfax on December 29, 1918, the youngest child of Ora and Risdon Forker. He graduated from Colfax High School in 1936 and moved to Des Moines. He worked for the Des Moines Register and Tribune until serving in the US Army from 1942 to 1946. Wilson then joined the Equitable of Iowa as an Insurance Agent and also enrolled in Drake University. In 1949, he graduated from Drake with a Bachelor of Science Degree as well as earning his CLU designation, and in 1950, he was promoted to Agency Supervisor. In 1952, his promotion to the Home Office led to his ultimate position as President and Chief Executive Officer of EI Sales, Inc. Upon retiring in 1982, he became President of the Board of Directors of South Iowa Methodist Homes (now Wesley Retirement Services).

Joining the First United Methodist Church in 1936, Wilson was an active member, serving in many roles including Chairman of the Board of Trustees, Sunday School teacher, and director of many annual fund raising campaigns. He was a member of the Downtown Des Moines Kiwanis Club for nearly 50 years, serving as President in 1973. Wilson was a 50-year member of Waveland Park Lodge No. 654. He was the first president of the Hoover Booster Club.

After becoming a drummer in the Colfax High School Band, Wilson enjoyed a life-long love affair with the Summer Band Concerts on the Capital steps and always said that his favorite kind of music was Sousa marches. He was an avid photographer and had a passion for helping others.

Wilson was preceded in death by his parents, three sisters, and two brothers. He is survived by Idabelle, his wife of 65 years, two sons, Alan (Jackie) of Denver, CO, and Tom (Beverly) of Los Alamos, NM, and four grandsons.

To send flowers or a remembrance gift to the family of Wilson Forker, please visit our Tribute Store.