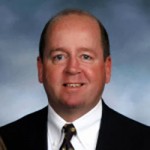 Mike moved with his family to Des Moines and attended Holy Trinity and then Dowling Catholic High School, graduating in 1981. He received a Bachelor of Arts in English in 1985 from the University of Iowa. He continued his education at Drake University where he earned a J.D. in 1989. After two years as the assistant county attorney in Hardin County, he spent the next 28 years as an assistant county attorney in Polk County. He married Marcia (Kuecker) Hunter on October 8, 1994, in Des Moines, and several years later they were thrilled to welcome their daughter, Leah and complete their family.

Besides spending time with his family, Mike loved the Cubs, the Bears, the Hawkeyes, the Blues, the Stones, and many other great Rock groups. He also enjoyed spending time on his land, hunting deer, and hunting pheasant.

Mike is survived by his wife and daughter; his mother, Leah Hunter; three brothers, Jeff, John (Deb), and Patrick; one sister, Teresa; and nephew, Daniel. He was preceded in death by his father, Quentin Hunter.

A celebration of life service for friends and family will be held at 5:15 p.m., Friday, June 25, 2021 at St. Francis of Assisi Catholic Church, West Des Moines. In lieu of flowers, memorial contributions may be made to Hope Ministries and Catholic Charities - Diocese of Des Moines. The service will be livestreamed for those unable to attend. A link will appear at 5pm (Just prior to the service) on Michael's obituary page at www.IlesCares.com, where you may also leave online condolences.

To send flowers or a remembrance gift to the family of Michael Hunter, please visit our Tribute Store.